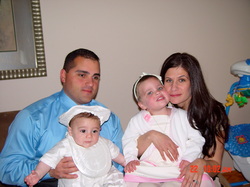 On May 16, 2003, Mike and I welcomed our Little Princess Gianna Nicole into this world and couldn’t be happier. After a very uncomfortable and complicated pregnancy, Gianna arrived via emergency c-section and was brought straight to the neonatal unit.

At less than a day old, she was diagnosed with a heart problem called Pulmonary Stenosis. Needless to say we were horrified, but at six weeks of age our little angel had a heart catherization which was very successful. Life couldn’t have been better at this point. Although Gianna was colic for the next six months, she was beginning to develop her own little personality and had a way of touching the hearts of whoever she met.

Maybe it was the sparkle in her beautiful blue eyes, or just her ability to make you feel special… whatever it was, she won over All who met her. Life for everyone in our family seemed to revolve around our princess.

The joy she brought to each and every one of us is truly amazing. Before Gianna’s second birthday, we learned that she was going to be a big sister. We were all so excited and could hardly wait for our new arrival to come. However, a short time after our happy news, our fairytale life turned into a horrific nightmare. After noticing many bruises on Gianna’s body, some routine blood tests were performed.

We can still hear the horrible words ringing in our ears: Our little girl has cancer! On July 11, 2005 life as we knew it would FOREVER change; Gianna had a rare type of leukemia. We were absolutely devastated. How could life change so quickly ? How could this happen to our innocent child? We knew we had an uphill battle, but all who knew Gianna knew she was a fighter. It is Gianna’s strength and courage that gave us the energy and positive attitude to get through each and every day.
Gianna was in complete awe of her new baby brother Michael Christian. Even when she wasn’t feeling great, she always gave him her fullest attention.

Gianna loved to be Michael’s “mommy” and would miss him so much when she needed to be hospitalized. Fortunately, Mike and I had our families to take care of Michael because there were many times that we were away from our new baby for weeks at a time. Life was hard at this point but we felt blessed that Gianna remained in remission.

However, after fourteen long, difficult months of treatment Gianna suddenly relapsed. Once again that gut wrenching feeling came back, but we remained hopeful that a bone marrow transplant would work. Gianna was again given very high doses of chemotherapy.

Although this treatment caused many setbacks and infections, we were grateful it put her back into remission. At this point Gianna was able to spend some time at home with our family while we awaited her transplant day. During this time at home we celebrated a belated Christmas with our families and just enjoyed every minute with our two children.

Then the day came that we would have to be admitted for transplant. During this time, Gianna was in seclusion from everyone except Mike and I. It was extremely painful for both Gianna and our families to be apart for so long but we all prayed that someday this horror would just be behind us.
Life truly seems worthless without Gianna here with us. Not only did we lose our daughter but our son lost his only sister whom he asks for everyday of his life.

Our hearts can never be whole again. Gianna is truly an inspiration to our entire family and has blessed us in a way that only an angel can do. Although she was taken from us way too soon, the enormous amount of love that she has placed in our hearts will be with us forever.

It is with this love that we started Gianna Nicole’s Heart of Hope Foundation. By helping other families in need, we will allow Gianna’s legacy to live on and continue spreading the love she has brought to everyone around her.